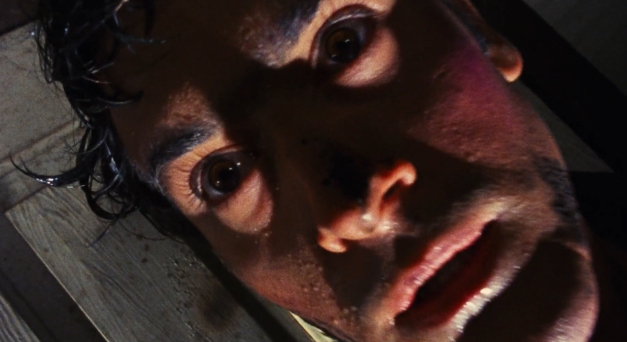 Number 22 of My Top 31 Horror Movies : Five friends travel to a cabin in a remote region of Tennessee, where they release flesh-possessing demons : Sam Raimi’s THE EVIL DEAD is still after all these years a joy to behold, a guilty pleasure, a wickid low budget scare fest that sees actor Bruce Campbell get pretty much everything thrown at him and his friends? well they get attacked, possessed and wreak holy havoc : there’s no doubt that the two sequels to The Evil Dead are great fun but it’s Raimi’s original released back in 1981 that holds a place in my horror loving heart : right from the offset when their car crosses that rickety old bridge on their way to the cabin, the banging of the swing porch and then as the key is retrieved from it’s place above the door the swing stops, the poster nod to Craven down in the cellar and for a budget of $400,000 the effects throughout are impressively gruesome especially Cheryl’s possessed demon who’s one mean, twisted servant from hell : I rememeber watching this over a friends house during my early teens a few years after it’s initial release and being scare senseless, from it’s shaky camera work, the wind effect, the tree attack to the body dismemberment all had a lasting effect on me growing up and still does : The Evil Dead is pure brilliance, shoe string budget filmmaking of the highest standard that MUST BE WATCHED at least once a year : speaking in my best demonic voice JOIN US ★★★★★