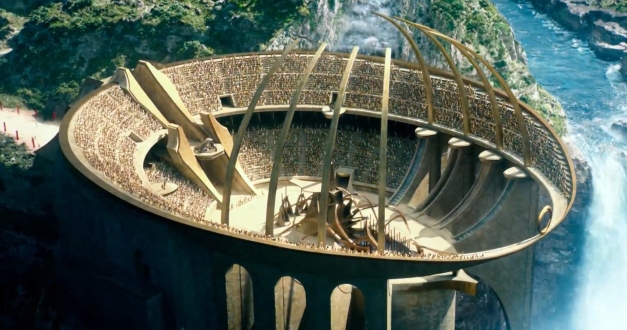 Diana lives the normal life among mortals in the 80s : she maintains her low profile by curating ancient artifacts, and only performing heroic acts incognito : but after the magical Dreamstone goes missing Diana will have to come out from the shadows to save the world we know from the greed and cunning of Max Lord and the evil Cheetah : WW84 sees it’s director Patty Jenkins reunite with stars Gal Gadot and Chris Pine for yet another round of insanely seductive superhero fun that may lack the 80s vibe I was hoping for but delivers everything else from it’s Lasso twirling energy, the enthralling Themyscira games that open up proceedings, the robbery at the mall is a hoot, Diana & Steve’s off the chart chemistry and the emotion it carries, Hans Zimmer’s thunderous score, THAT Golden Armor, Pedro Pascal’s crazy villain reminding me of Donner’s Lex Luthor and a spicey turn by Kristen Wigg as Barbara Minerva, bringing shy and ditzy to her character with screen owning brilliance : WW84 may not be quite as good as it’s trailblazing and much loved original but for me Patty Jenkins has delivered another bold spectacle that’s bright, infectious and hugely exciting to watch ★★★★

Two Mercenaries played by Matt Damon and Pedro Pascal get caught in the middle of an ancient war between Chinese Warrior’s guarding The Great Wall and an angry mob of Alien Monsters that appear to cause mayhem every 60yrs….

The Great Wall is the most expensive Chinese movie ever made, it stars Jing Tian, Andy Lau, Matt Damon and Pedro Pascal and is directed by the visual master Zhang Yimou known for his work on House of the Flying Daggers and Hero….

Before I get on with my thoughts on this movie I must address the fact that there is NO whitewashing in this movie AT ALL so any controversy regarding Matt Damon’s character that happens to be set in China is sadly an attempt for those with plenty of time on there hands to be negative towards a movie that they’ve probably not seen in the first place….

OK now on to the good stuff – If like me you enjoy the fix of a well paced, epic scale action movie that’s jam packed with dazzling effects & inventive, colorful battle scenes then Zhang Yimou’s The Great Wall is just what your looking for – what the picture may lack in overall substance it certainly delivers in beauty & creativity – the film’s 3D adds a stunning depth and also gave me a sense of vertigo whist watching certain scenes, especially those where the Chinese Warriors would dive off the Great Wall attached to a rope (like a bungee) attempting to spear the attacking monsters, now that’s some crazy shit right there and was pulled off by Zhang in impressive style – when the hoards of these mean & nasty looking monsters start storming the Wall, snapping like crocodiles it reminded me so much of when the Orc Army attacked Minas Tirith in Peter Jackson’s epic Return of the King, the CGI in the movie is sensational & I felt submerged, part of the action whilst watching in IMAX – the screen is magnificent and it enhances everything in it’s path from the stunning effects, the beauty & tenacity of Jing Tian, Matt Damon’s archery & wild facial hair, the incredible battle scenes and it’s rousing atmospheric score….

From it’s lavish synchronized drummers, hair-raising action sequences and pulse-raising final quarter The Great Wall is a triumph in film entertainment – be honest with yourself if you pay to go and see this film then you must love your action right? and you know your not going to the cinema to watch Opera or Shakespeare right? HELL YEAH come on !! this is a Magnificent Monster Movie, one that’s loud, explosive and pretty awesome fun – so go on take a leap, immerse yourself & ENJOY…. ★★★★