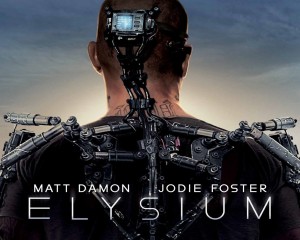 ELYSIUM stars Matt Damon, Jodie Foster, Sharlto Copley & William Fichtner – set in the future where two worlds exist, one called Elysium a man-made space station, thats self contained with it’s population living in luxury and the added bonus of a healthy lifestyle guaranteed – the other a broken Earth, over populated, disease ridden and full of mayhem and destruction – Max (Matt Damon) is an ex-parolee who lives in the latter, and is about to have a pretty bad few days, after a series of unfortunate events Max is left with no option but seek out his past & take on a mission, one that will have serious consequences for those living on both worlds…VERDICT a couple of reasons why I loved Neill Blomkamp’s Elysium – firstly Sharlto Copley’s villainous turn as Kruger a sleeper agent working for Elysium who is based on Earth does one hell of a job in frightening the holy crap out of anyone who gets in his way, sporting a full on beard, battle scarred and looking totally “don’t fuck with me” bad-ass, Kruger makes Anton from No Country For Old Men look like a pussy and don’t get me started on that wonderful, menacing South African accent – and secondly this is pure cinematic entertainment, a popcorn munching, thrill ride from one hell of a director and a cast that includes Damon, Foster and Fichtner all having fun with their respective roles – yes Elysium does have it’s flaws – the storyline is predictable and some of the characters seem thinly written but hell this is a summer blockbuster (this is not Schindler’s List) just sit back and enjoy the ride… it’s a good one! ★★★★