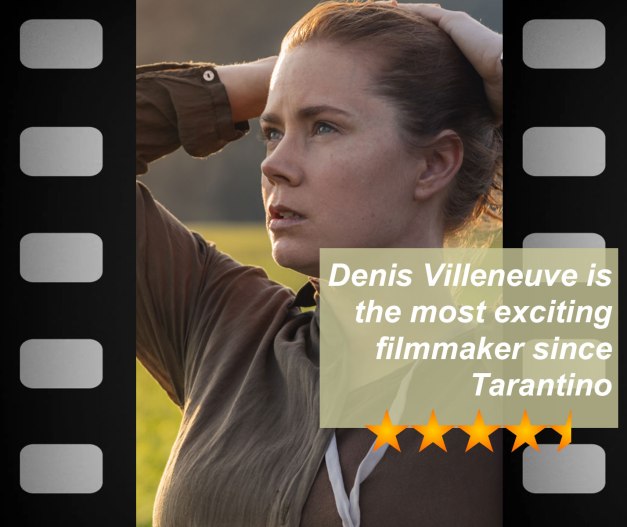 For me Denis Villeneuve has joined a select band of filmmakers that manage to excite me, make me giddy with film fever and have so far delivered with every movie I’ve watched – the likes of  Cameron, Tarantino and Nichols are also in that group so as you can see I highly rate this talented Canadian who’s last 3 movies Enemy, Prisoners and Sicario have all left me speechless and for many different reason’s blew my movie loving mind – Arrival is not your typical first contact picture, it’s based on Ted Chiang’s short story titled “Story of your Life” and is somewhat a science fiction love story, that’s powerfully captivating and tugs at your heart strings on so many levels – some of Villeneuve’s strength’s as a filmmaker is how he deals with the characters within the films narrative, managing to humanize them and make you care for them but also building a tension that surrounds them, this is difficult to achieve so it’s no surprise if you look at who he brings on board and trusts to convey his vision – at the heart of Arrival is Amy Adams who delivers a vulnerable yet equally strong performance playing Linguistics professor Louise Banks a women who’s known huge loss in her life yet shows the fight to continue on – Arrival essentially deals with grief and how we handle it, and one of Amy’s strong points as an actress is her facial features she has that honest, natural look, her eye’s give so much away so that her character’s interaction with the aliens is not only a scary encounter but also a thing of beauty too – now if filmmaker Villeneuve and actress Amy Adams are not enough to tempt you to watch this fabulous slice of Science Fiction on the big screen then Bradford Young’s sumptuous, flawless cinematography must surely twist your arm, remember when you first watched Kubrick’s 2001 or Spielberg’s Close Encounters and felt delirious, allowing the vision of the movie to spin into cinematic greatness well Bradford Young’s work is in similar vein, his use of light inside the space ship is paramount to the films overall feel and it’s mastered beautifully so if you thought Bradford’s work on Ain’t them Bodies and A Most Violent Year were great then wait till you see Arrival – this is no Independence Day Arrival is a bold, compelling, original slice of science fiction that’s full of suspense and sentiment – in it’s genre it’s one of the most thought provoking, written pictures for many a year and yet another fabulous cinematic experience by Villeneuve – bring on that Blade Runner sequel this guy can’t wait….