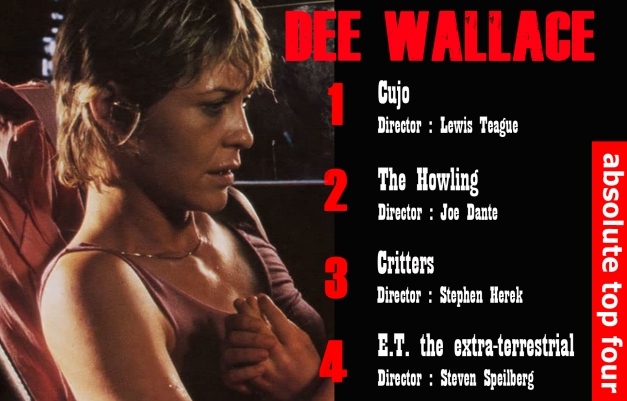 What can I say about the lovely DEE WALLACE who was born on the 14th December 1948 : what an actress, what a scream queen and what an impact this gal from Kansas City had on me, who lit up my favorite genre with superb turns in movies such as The Howling, Alligator II, The Hills Have Eyes, The Frighteners, Critters and the best of the bunch Cujo a Stephen King adaption that still scares me even now : the first time I remember watching Dee was back in 1982, when she played Drew Barrymore’s mum in Steven Spielberg’s E.T. and what a fabulous performance in such a great movie : luckily for us Dee Wallace is still knocking out the films and was seen recently in 2017’s Death House, 2019’s 3 from Hell and 2016’s Aussie Horror Red Christmas : me personally I hope Dee’s around making movies for another 30ys : such an ICONIC movie presence