Director: Mike Flanagan – Cast: Karen Gillan, Brenton Thwaites, Katee Sackhoff, Kate Siegel, Annalise Basso & Rory Cochrane – Synopsis: Growing up 10yr old Tim and his 13yr old sister Kaylie were inserprable that was until Tim was sent to a psychiatric hospital for the supposed murder of their parents – Kaylie always suspected that an antique mirror haunted by a supernatural entity was responsible for these hideous crimes & spent the time her brother was locked away researching & documenting the lives and deaths of everyone who came in contact with it – upon Tim’s release from the hospital 11yrs later Kaylie sets out to prove her brothers innocence & destroy this supernatural force forever – Verdict: The film is based upon a short by Flanagan that was released in 2006 titled Oculus: Chapter 3 – The Man with the Plan – using flashbacks Oculus entwines two parallel stories that center around the Russell family in the past & present, this is cleverly used by Flanagan helping develop the structure of the story and adding to it’s creepiness – rather than the mundane, uninspired found footage format or the blood & gore from the general run of the mill slasher flick Flanagan injects a dose of horror reminiscent in style of James Wan, that’s almost a throwback in style to the 70s and 80s, with some fabulous character building, interesting camera angles and a film brought to life by a group of very talented young actors including Battle Star’s Katee Sackhoff, Doctor Who’s Karen Gillan and the talented Maleficent star Brenton Thwaites who all turn in excellent performances -made for just under $5 Million Oculus is a gem of a ghost story – yes at times the movie get’s a little lost in it’s illusions & hallucinations and forgets to scare but Overall: there’s enough to this movie to keep you rooted to your chair and have you avoiding mirrors at your home for days after….

Angelina Jolie and Elle Fanning star in the upcoming Disney movie MALEFICENT – a fantasy tale set around the classic story of Sleeping Beauty but told from the perspective of the villainous Maleficent played by an evil looking Jolie – here’s some new character posters for your enjoyment – the movie opens in a few weeks…. Enjoy!

Here’s some new Theatrical Banners from four new films coming soon – First up the delicious GODZILLA that stars Aaron Taylor-Johnson and Bryan Cranston and is helmed by Monsters Director Gareth Edwards – from the footage I’ve seen already this one promises to be this years Pacific Rim (love me some monster mayhem) – next up is Marc Webb’s THE AMAZING SPIDER-MAN 2 banner that is simply electrifying, the film stars Andrew Garfield & Emma Stone and see’s our hero take on Electro, The Rhino and The Green Goblin – this one’s followed by MALEFICENT the new Disney movie that stars Angelina Jolie & Elle Fanning – I must confess after watching the trailer this one has moved up a few notches on my 2014 must see list – and finally we have Adam Sandler and Drew Barrymore reuniting for more comical romance in BLENDED – big fan of these two, loved The Wedding Singer and 50 First Dates so more of the same and I will be a happy chappy…. Enjoy! 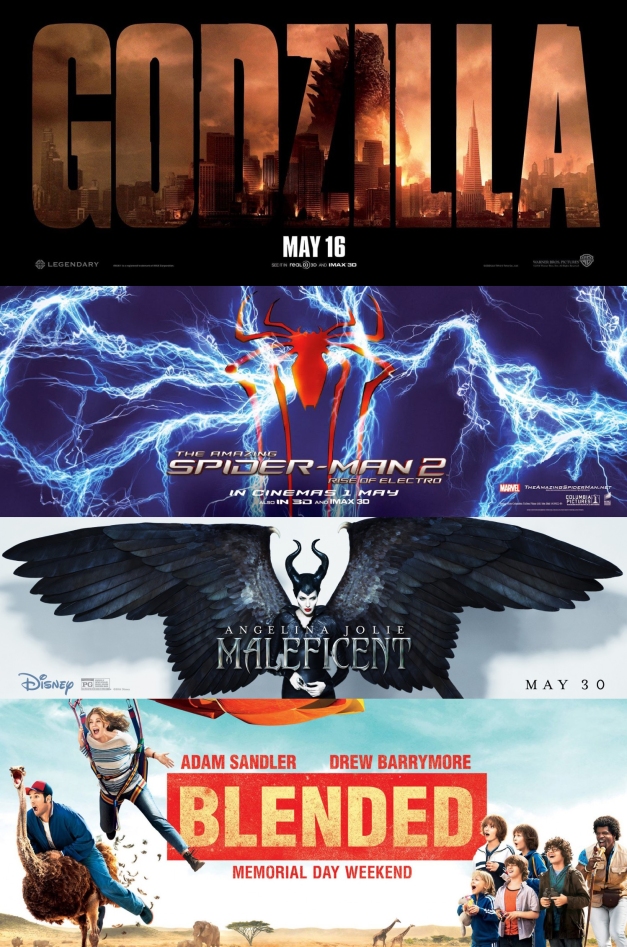