A woman and two men find themselves on the run in the Irish countryside after a heist gone wrong : OK in this incredibly pc world of ours if your offended by two young English actors in Olivia Cooke and Ben Hardy playing the lead roles in an Irish dark humored heist movie then get over it, Barnaby Thompson’s rollocking new movie is a low budget gem that not only showcases the beauty of Ireland but entertains and will definitely give you a giggle or two : PIXIE is my kinda movie jam, from it’s quirky characters including the typical and not so in Colm Meaney playing the typical Dermot O’Brien and Alec Baldwin who plays the not so typical Father Hector McGrath, both actors look like they had a blast with their small yet pivotel roles and THAT church shootout scene is totally and utterly box office : Ready Player One’s Olivia Cooke plays Pixie the clever manipulative lead in the story who’s out for revenge, cause a little chaos and hopefully nab a ticket to San Francisco in the run in, the fun she has with the two lads Frank & Harland played by Ben Hardy and Daryl McCormack is superb and the scene with the gas attendent is downright hilarious and cute to boot : so if like me you love a good IRISH film, with some gorgeous scenery filmed by John de Borman, a dark & humor filled script by Preston Thompson and yet another devilishly good turn by Ned Dennehy who plays an Irish hitman then you’ll wana check this one out : THUMBS UP from this crazy cat ★★★★

the wait is now over !! After much anticipation I have now seen Steven Spielberg’s big screen adaption of Ernest Cline’s scifi novel Ready Player One at the cinema and as the end credits came up my very first thoughts were….

WOW as a movie experience I LOVED IT – it’s a classic Spielberg picture, totally immersive, ridiculously fun and jam packed full of endless movie references that will make your face beam like a kid at Christmas – the movies eye popping visuals, heart thumping audio and buckle your seat style of action is energising with a whole bunch of animation/real world cross over scenes that are utterly bonkers – along with the chest bursting scene that had me in tears and every bit of DeLorean screen time I have to say the best part of the movie is The Shining segment it’s quite something, the attention to detail is sublime and without giving too much away it’s so much fun….

The one thing that really does rankle me about the movie is WHY did Ernest Cline participate in changing so much of his beloved slice of escapism when adapting Ready Player One to film? For me it’s a crazy thing to do and I can totally understand die-hard fans of his novel being unhappy at the film’s outcome – the characters back story, how they all met, the quests in the Oasis are all played out differently, so there’s no easy way to say this except that Ernest Cline sold his soul to those in Hollywood when he should have stood firm at least with the core of his creation…. Nevertheless when all is said and done we all go the cinema to be entertained and Steven Spielberg has once again demonstrated his greatness in delivering a magical, enthralling movie going experience – Ready Player One requires urgent big screen attention…. put on your 3D goggles the Oasis awaits ★★★★ 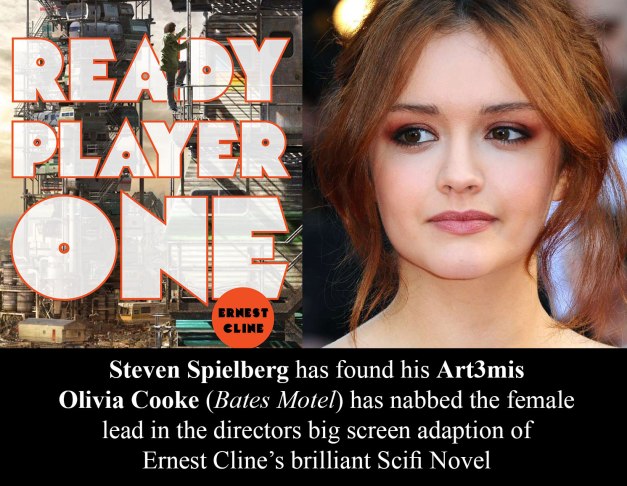