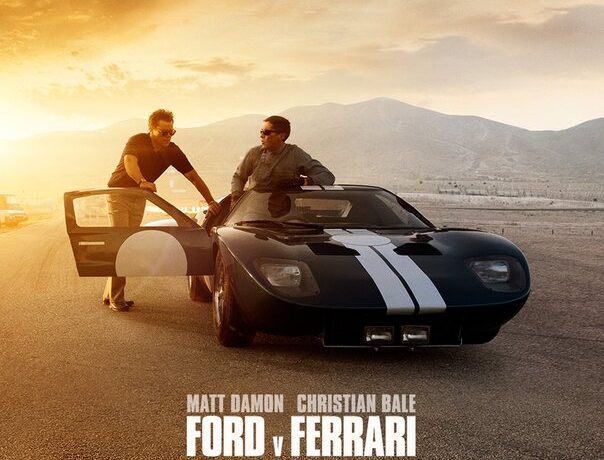 Cop Land, 3:10 to Yuma, The Wolverine, Logan and now FORD v FERRARI James Mangold’s thrill ride, a 7,000 RPM adrenaline fueled, pulsating ENERGY packed racing movie that sees Matt Damon deliver a career best, Christian Bale in infectious form, Caitriona Balfe delivering one of the film’s best moments and the race scenes WOW their pure dynamite – for me 2019 is the best year of the decade for cinematic treasures and this film continues the trend in leaving me speechless and rather emotional as I left my seat at the big screen – obviously the Le Mans track has changed through the years since the 60s so how on earth did James Mangold and his team recreate the movies focal point? it’s just mind boggling, the camera work by the Greek cinematographer Phedon Papamichael is sublime, his work in creating that claustrophobic yet thrilling car racing scenes is pure brilliance but for me the main reason this movie succeeds is it’s cast who are simply magnetic – what a movie and a ride you don’t wana miss on the big screen ★★★★★

I really ENJOYED Kriv Stenders edge of the seat Crash-style thriller Australia Day – along with Bryan Brown & Shari Sebbens who is bloody brilliant by the way, it’s young cast really does excell & allows the films story to roll at a break neck pace and feel downright authentic – there’s so much running in the movie that at times I felt out of breath watching it all go down – the film brings to light a whole lot of issues such as race and underage prostitution and although there’s nothing new about it’s narrative filmmaker Kriv Stenders handles it well and delivers a movie that balances between a high octain thriller and one that also makes one think of the choices & consequences in one’s life – overall Australia Day is well worth the watch and yet another Aussie Gem ★★★★

from it’s gritty storyline, Takayanagi’s haunting at times beautiful camera work, Bale & Pike’s ability to suck you into Cooper’s narrative and Max Richter’s soul searching score Hostiles is one of the Best Western since Eastwood’s Unforgiven, it’s dark & brutal just like the times, it’s uncomplicated and I can’t remember Christian Bale ever giving a better performance – this is one to watch on the big screen, it’s a visual treat and by the way it’s by no means the Bale & Pike show there’s a whole bunch of stone cold, gritty performances from the tigerish Rory Cochrane as Metz, Jesse Plemons (yep him again) as Kidder & Jonathan Majors as Woodsen – Scott Cooper’s Hostiles is such an awesome ride LOVED IT !! ★★★★½

From the director who brought us Gladiator, Alien and Blade Runner comes a biblical epic set during the times of Moses and Rhamses EXODUS : GODS and KINGS – the film stars Sigourney Weaver, Christian Bale, Joel Edgerton, Ben Kingsley and Aaron Paul and judging by this trailer looks pretty damn mouth watering – after recent dud’s including Prometheus and The Counselor I’m hoping for a return to form from one of cinema’s greatest filmmakers – the movie lands December this year – above are some new stills and here’s the trailer…. Enjoy!

American Hustle stars Christian Bale, Jennifer Lawrence, Bradley Cooper, Amy Adams, Jeremy Renner & Robert De Niro – Originally titled American Bullshit comes a story about a con man, Irving Rosenfeld (Bale), and his sexy, seductive partner Sydney Prosser (Adams) who are forced into working for the FBI by a wild agent named Richie DiMaso (Copper) who wants to bring down corrupt politicians – this threesome becomes more messed up when Rosenfeld’s unpredictable, fun loving wife Rosalyn played by Jennifer Lawrence gets involved – VERDICT yet another wonderful picture from David O Russell the director of I Heart Huckabees, The Fighter & Silver Linings Playbook – his latest American Hustle is a delicious cocktail of dark humor & captivating performances from the likes of Bradley Cooper who deserves Oscar Recognition for his take on Richie DiMaso the wacky, tacky ambitious FBI agent who’s obsessed in taking down the corrupt, the beautiful Amy Adams who’s raw aggressive acting & revealing dress wear is mesmerizing and Christian Bale brings his A game to the party with a performance so good that it pulls you into you the character he’s playing and never lets you go he’s outstanding – it must also be said the marvelous sets & costume designs are pretty impressive giving the 70s era New Jersey a fantastic look adding to the vibe of the picture – Jennifer Lawrence gives yet another superb performance playing Bale’s wife, Michael Peña is delightful playing Sheik Abdullah and Robert De Niro pops up in a small role playing a mafia boss – overall David O Russell’s American Hustle is an exciting, smart and original picture that’s not quite to the standards of Silver Lining but a fabulous cinematic romp nevertheless – I would be very surprised if American Hustle didn’t feature heavily at this years Academy Awards – wonderful, electric & utterly brilliant!….

Cast: Christian Bale, Casey Affleck, Woody Harrelson, Zoe Saldana, Forest Whitaker, Willem Dafoe & Sam Shepard – When Rodney (Affleck) disappears and the local law doesn’t do enough to find him it’s left to his older brother Russell (Bale) to takes matters into his own hands to find justice VERDICT Scott Cooper’s directorial debut Crazy Heart was a pretty average affair lit up by a fabulous Jeff Bridges performance but his second feature behind the camera OUT OF THE FURNACE is a powerful, mood driven picture set in and around the Blue Collar Rust Belt containing some Cracker Jack performances, a haunting soundtrack but most of all the brutal reality you feel whilst watching these two brothers who have not only combated war & prison but have had to contend with everyday life, struggling by in the gritty harshness of a small steel town – the acting is one of a master class with Christian Bale giving a sublime display of the wiser older sibling, Casey Affleck plays the younger brother visibly damaged by his time in the war who gets sucked into the underground fight scene to settle his debts, it’s a quite heartbreaking performance and easily his best onscreen display since 2010’s The Killer Inside Me and then we have Woody Harrelson playing to perfection the uncompromising, despicable hillbilly drug lord who’s character is such a far cry from that of Haymitch in The Hunger Games – overall from them opening scenes at the drive-in movie theater, the  to the dingy underground fight clubs OUT OF THE FURNACE is an underrated, riveting piece of cinema that should not be missed!!!

When Rodney (Affleck) disappears and the local law enforcement fail to find him, his older brother, Russell (Bale) looks to find his own kind justice by taking matters into his own hands.

Scott Cooper who directed Jeff Bridges to Oscar glory in 2009’s Crazy Heart had said that he would not direct Out of the Furnace his second feature without Christian Bale as his lead.

Below is a selection of the cast – just another 5 reasons why I’m pretty excited for this movie….

Take a peek at the Out of the Furnace movie trailer