sad news the badass Frank McRae has died aged 80 : although he wasn’t a huge star and quite often found himself in smaller roles Frank managed to put his own stamp on the movie world, giving us character’s we fondly remember, with eye catching performances such as Harry in *batteries Not Included, Ogden Jones alongside Dan Aykroyd in 1941, Mr Teasdale in the 1984’s cult classic Red Dawn, Dekker in The Last Action Hero, and Haden in 48hrs, he also starred in other films such as 007’s Licence to Kill, 1973’s gangster film Dillinger and not to mention his collaboration’s with Sylvester Stallone on film’s such as F.I.S.T., Paradise Alley, Lock Up and Rocky II : as I look around my film library and spot some of the film’s mentioned I’m sad at his loss but I also smile reminiscing at the many delightful performances this wonderful character actor has given us….

Today the world of film has lost Tanya Roberts aged 65 : I will always remember Tanya for the beauty she gave us in two films that came out whilst I was in my early teens, 1982’s fantasy movie The Beastmaster where she played Kiri opposite Marc Singer and in 1985 she starred alongside Roger Moore in A View to a Kill playing Bond Woman Stacey Sutton : on the small screen Tanya starred in over a dozen episodes of the TV show Charlie’s Angels as Julie Rogers and in recent years playing Midge Pinciotti on That ’70s Show : she will be missed !!

Number 1 of My Sean Connery James Bond Movies : While investigating a gold magnate’s smuggling ring, 007 uncovers a plot involving the Fort Knox gold reserve : Guy Hamilton’s GOLDFINGER is the embodiment of every James Bond movie that followed, from Connery’s exquisite self assured turn as British Secret Agent 007, the entertaining set pieces, Lois Maxwell’s familiar Miss Moneypenny, it’s wonderful & catchy John Barry score, those infamous Bond puns, recognisable villains, in Goldfinger it was Harold Sakata’s Oddjob and of course those marvelous Bond Women and in 1964 it was Honor Blackman’s iconic Pussy Galore that clawed the screen : in the Sean Connery 007 era Goldfinger has no equals, it’s an exciting spy thriller from start to finish and one that still holds up well today ★★★★★

Number 2 of My Sean Connery James Bond Movies : 007 goes head to head with an eccentric scientist, Dr No, who is determined to ruin the US space programme : DR. NO will always hold a place dear to my heart, it’s the first movie in the Bond franchise but it also has this incredible Jamaican backdrop including a place I’ve visited Dunn’s River Falls, Jack Lord’s best screen portrayal of Felix Leiter, the gorgeous Ursula Andress who’s scintillating turn as Honey Ryder and her infamous beach scene made quite the impression on a much younger me and of course it’s memorable music including Three Blind Mice that was used during it’s opening scene ★★★★★

Number 3 of My Sean Connery James Bond Movies : 007 heads to the Bahamas to recover two nuclear warheads stolen by S.P.E.C.T.R.E. : THUNDERBALL is the fourth film in the franchise and won an Academy Award for it’s special effects : the film itself is quite exhilarating containing all the trappings of a great spy thriller : Claudine Auger’s Domino dazzles, Adolfo Celi who plays Emilio Largo makes for a good 007 adversary, his eye-patch gives him added menace and those underwater assault scenes are truly magnificent to watch ★★★★★

Number 4 of My Sean Connery James Bond Movies : 007 gets involved with a naive Russian beauty in order to retrieve a Soviet encryption device that was stolen by S.P.E.C.T.R.E. : Robert Shaw’s Red and Lotte Lenya’s Colonel Rosa Klebb are just two of many reasons I love revisiting Terence Young’s highly entertaining FROM RUSSIA WITH LOVE : the fight scene between 007 and Red in the carriage of the train is certainly amongst the film’s highlights and upon it’s release in 1963 the movie was a box office hit, almost doubling the takings of Dr. No that was released in the previous year ★★★★★

Number 5 of My Sean Connery James Bond Movies : 007 and the Japanese Secret Service must work together to stop a series of space hijackings, before war is declared between Russia and the US : YOU ONLY LIVE TWICE was written by Roald Dahl and directed by Lewis Gilbert who later delivered the superb Moonraker & The Spy Who Loved Me : primarily filmed in Japan and with a volcano set that could be seen from three miles away You Only Live Twice is one of those movies that took me a while to warm too and now I just love revisiting : I find it’s story one of the more interesting Bond outings that sees James team up with the Japanese Secret Service, the characters are interesting and at times the action is breakneck with one of my favorite moments coming 25 minutes in when Bond finds himself fighting this huge henchman in Osato’s office, it’s one helluva scene : although he would later hunt Michael Myers in Halloween what came before was a magnificent Donald Pleasence performance as Ernst Stavro Blofeld, Pleasence capturing the calculating madness of this iconic Bond Villain and putting his own stamp on the Bond franchise ★★★★

Number 6 of My Sean Connery James Bond Movies : A diamond smuggling investigation leads 007 to the bright lights of Las Vegas, where he uncovers an evil plot involving the Evil Mastermind Blofeld : don’t ask me why but growing up DIAMONDS ARE FOREVER was easily my most watched of the Sean Connery 007 movies : maybe it was the enchanting and sadly underused Plenty O’Toole played by Lana Wood or maybe it was Blofeld’s henchmen Mr. Wint and Mr. Kidd who stole all the scenes they were in or possibly it could have been the Las Vegas backdrop that wowed me growing up…. but whatever the reason Guy Hamilton’s second Bond movie is a crazy mixed cocktail containing beautiful women, menancing & attractive villains, a Shirley Bassey intro song and Sean seeming to have fun with his last official outing as 007 ★★★★

Number 7 of My Sean Connery James Bond Movies : A S.P.E.C.T.R.E. Agent has stolen two American warheads, and it’s down to 007 to track their targets before they are detonated : not only is NEVER SAY NEVER AGAIN a blotch on Sean Connery’s career it was also a terrible movie to direct by Irvin Kershner who had previously directed the great Empire Strikes Back : for Bond fans this unofficial outing of 007 is still a stinker with Connery looking old and disinterested, it’s humor & action incredibly bland, an awful & frankly quite annoying film debut by Rowan Atkinson and the movies villains are poorly written and carried out by their respective actors with a whimper : the only positive in the movie was the fight scene between Bond and Lippe played by Pat Roach : a huge misfire ★★★

Sean Connery was born in Edinburgh, Scotland in 1930 and died in The Bahamas this morning in 2020 : the film world has lost a legend, a hero to many including myself and an actor that spanned a 60 year career….. he escaped from Alcatraz, was a British Secret Agent, an Irish-American cop, a Soviet Submarine Captain, an Immortal Swordsman, was King Arthur, Robin Hood and Indiana’s dad….. may you rest in peace Big Tam…..

Although I think Daniel Craig has been one of our weaker 007’s I’ve still really enjoyed his gritty, mostly dark take on our favourite secret agent and NO TIME TO DIE could end up being his best outing yet…. Firstly it’s directed by True Detective helmer Cary Joji Fukunaga and yes he’s also the filmmaker who brought us the brilliant Beasts of No Nation, he’s accompanied by the super talent DP Linus Sandgren (La La Land & First Man) so as a spectacle the film is sure to look bloody awesome : No Time To Die also sees the return of Christoph Waltz as Blofeld and the delightful Léa Seydoux as Dr. Swann but for me the most interesting duo to be cast is Lashana Lynch who plays a female 00 agent that’s shrouded in a little bit of mystery and the gorgeous Ana de Armas who plays a character called Paloma….. are you excited yet? Well if your not then it may be worth mentioning that the main villain of No Time To Die will be played by Rami Malek and the legend that is Hans Zimmer will be providing the film score…. still not impressed? Well I’ve tried…. check out the action packed trailer below and then start a James Bond rewatch and countdown the days until the film hit’s your local theater…. 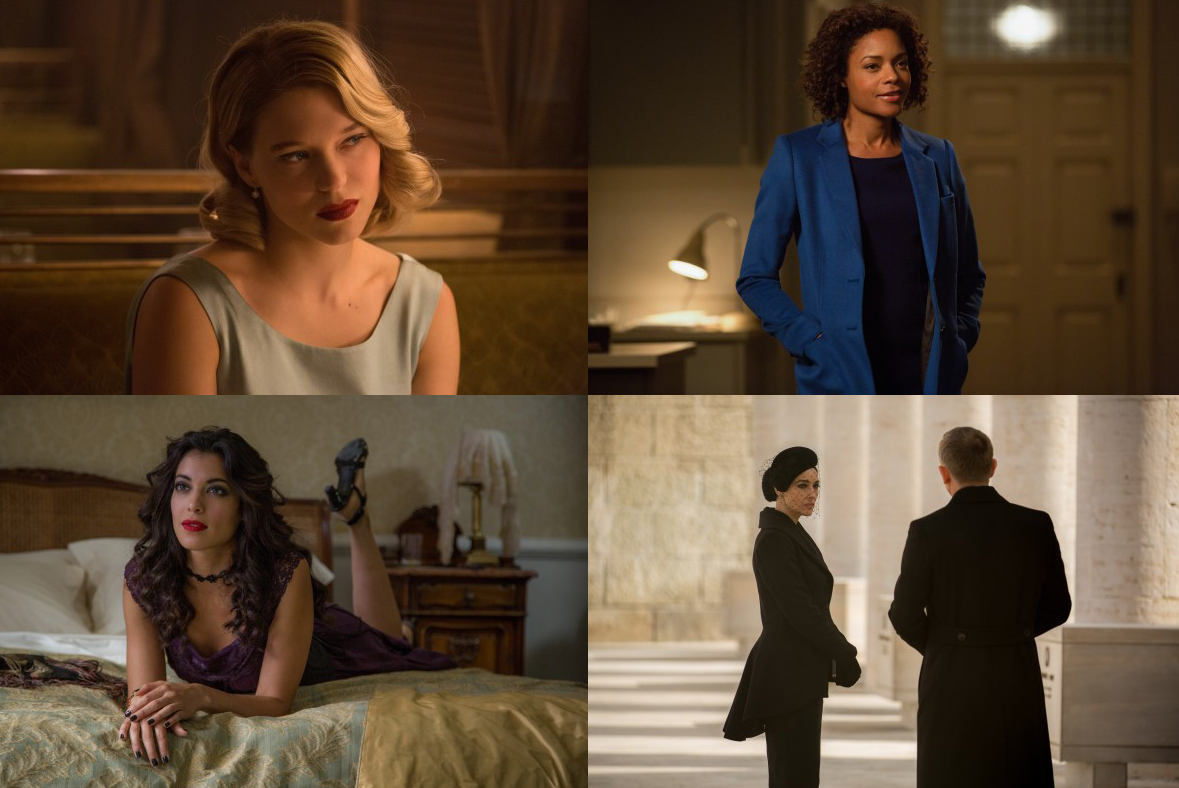 “A cryptic message from the past sends James Bond on a rogue mission to Mexico City and eventually Rome, where he meets Lucia Sciarra (Monica Bellucci), the beautiful and forbidden widow of an infamous criminal. Bond infiltrates a secret meeting and uncovers the existence of the sinister organisation known as SPECTRE”

Here’s the new trailer for Spectre the latest 007 movie that hits the big screen this November – loving that Sam Mendes is back behind the camera, he did such a good job with the beautifully shot 2012 Bond thriller Skyfall and judging by this first trailer Spectre could be right up there with it – take a peek at the trailer this latest Bond offering certainly looks mouth watering….

Here’s 2 brand new movie posters – on the left is the teaser for the 24th James Bond outing titled SPECTRE that sees the return of Daniel Craig as super spy 007 and behind the camera once more Sam Mendes – the confirmed cast also includes Dave Bautista, Léa Seydoux, Monica Belluci and Christoph Waltz excited yet? – on the right hand side the latest reboot of Sci-fi franchise TERMINATOR GENISYS that’s helmed by Alan Taylor (Thor 2) and stars Game of Thrones actress Emilia Clarke, Spartacus star Jai Courtney and the return of “I’ll be Back” and the man who started it all Arnold Schwarzenegger !! 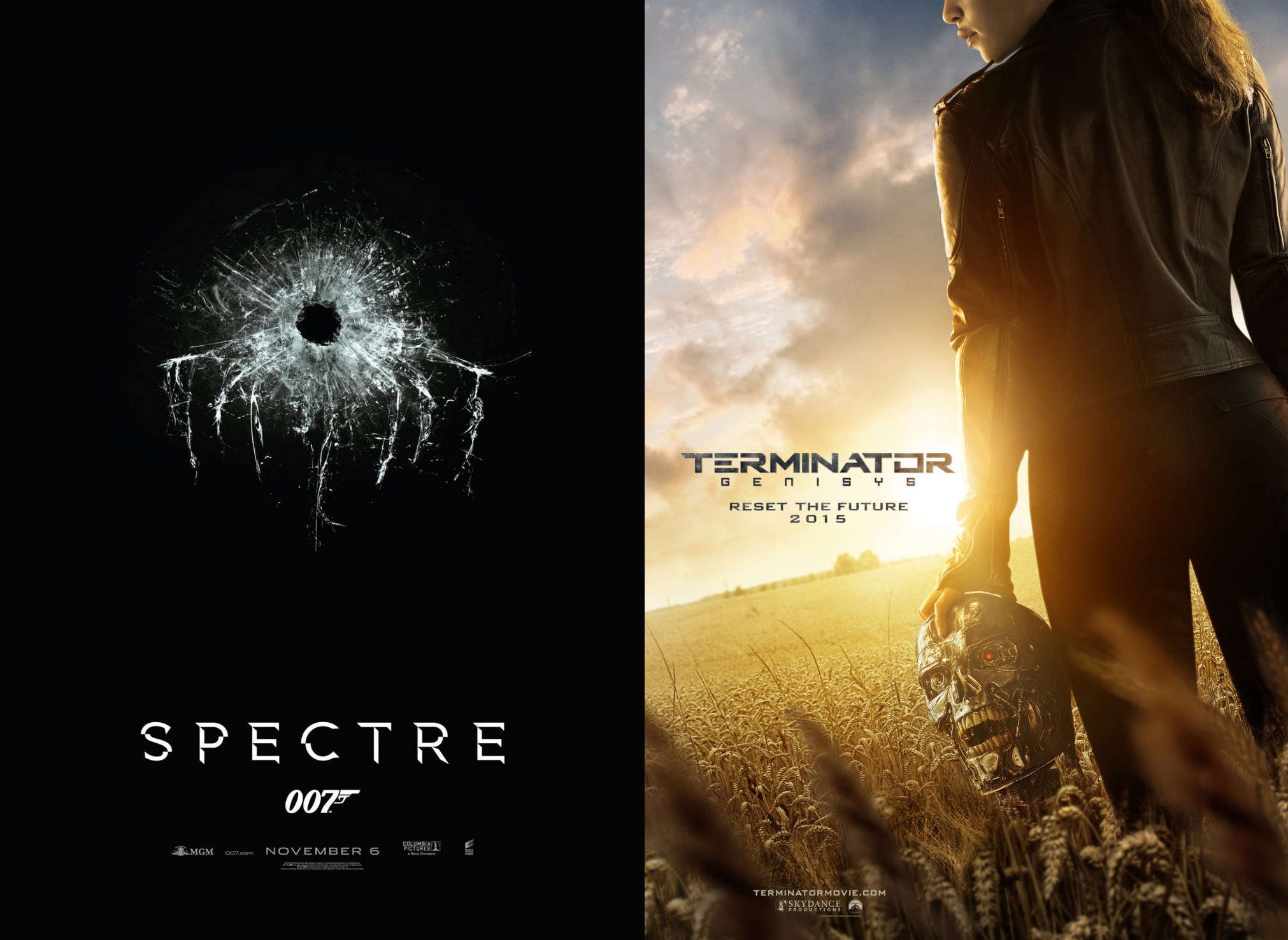 Whenever I see a cool movie montage I get chills up and down my spine and wish the day was long enough to watch them all one after the other – this 2mins clip of the classic movies of yesteryear is not quite long enough but gives you a small taste of what MGM has given us all over the years, so many memories and so many wonderful pictures – take a look at the video below & whilst your enjoying the clip wish MGM a Happy 90th Birthday!!!